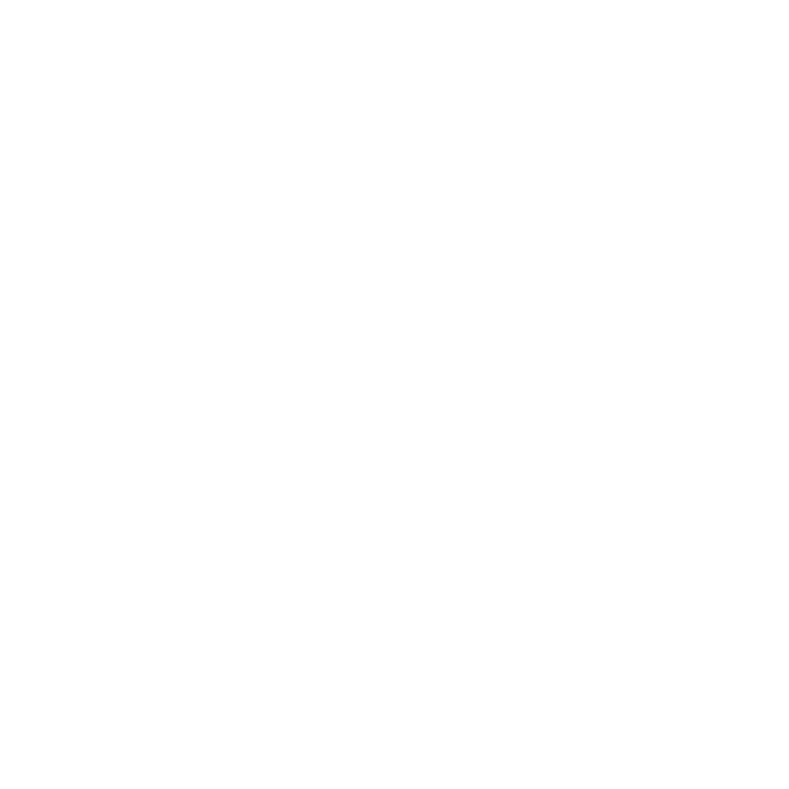 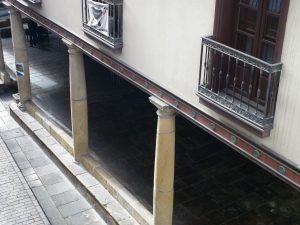 Old Town Hall. Until the construction of the town hall, the council that governed the town held its meetings in the corner end of Erdikokalea, in Xemein, and in the church of San Pedro de Elizabarria. The biography of this building, which today is the headquarters of the Justice of Peace, dates back to the 16th century. It is a property that has undergone different phases in its construction. Since the 18th century it was agreed to expand the first existing building so that in the 19th century it could proceed with new reforms and distributions in which the architect Rafael Zavala intervened.

On the ground floor there is a wide open portico supported by eight baroque sandstone columns from Mount Oiz made by Juan de Basaybar and Sebastián de Leixardi between the years 1636 and 1646. The first floor overlooks Guenkalea, Erdikokalea and Zeharkalea streets with wrought iron balconies. The portico, next to the main door, houses a canvas of the Immaculate Conception and a sign with the following text: Don Francisco Aguriano Bishop of Calahorra y la Calzada grants 40 days of indulgence to anyone who prays a Hail Mary or Hail to this Holy Image. The image and the text evoke the one who was the Patroness of the town from the 17th to the early 20th centuries.

The tower, from the 19th century, is included within the set of the old town hall; its construction, as well as the machinery of the clock, has undergone several reforms. The clock continues to provide the time and the tower is in excellent condition. 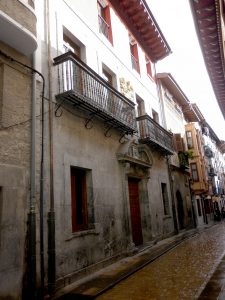 It is a baroque building whose execution is attributed to the architect Lucas Longa. Above the access, topped by a curved and split pediment, lays the Murga’s arms shine; a nude figure of a child holds the shield in sandstone, oval shape, with five poplar leaves and a border of thirteen eight-pointed stars. Its facade stands out for the ashlar masonry, the excellent forging of the balconies, the carvings of the eaves and the horse iron rings on the ground floor. 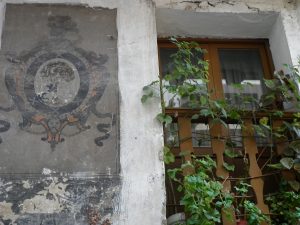 On this street there are two residential houses that maintain painted decoration on the wall of the main facade. Zeharkalea nº 3 has a triangular pediment with a circle inscribed on the lintel of the central span of the second floor. On the sides there are two hot air balloons similar to those from the late 18th century. In the upper part, a legend is distributed in three circular borders. The last one covered by a recent work. They say: SE EXECUTO (built) and AÑO (year) without seeing the one that has the date. The bottom of the wall is painted with simulating ashlars. The house that occupies nº 7 on this same street also maintains decorative paint on its walls. On the first floor, you can see various heraldic features like rockery and plants and on the second floor, faces appear above the windows. Two borders finish the facade with: AÑO and 1985. This building has been recently demolished and its facade rebuilt with reconstituted paintings. 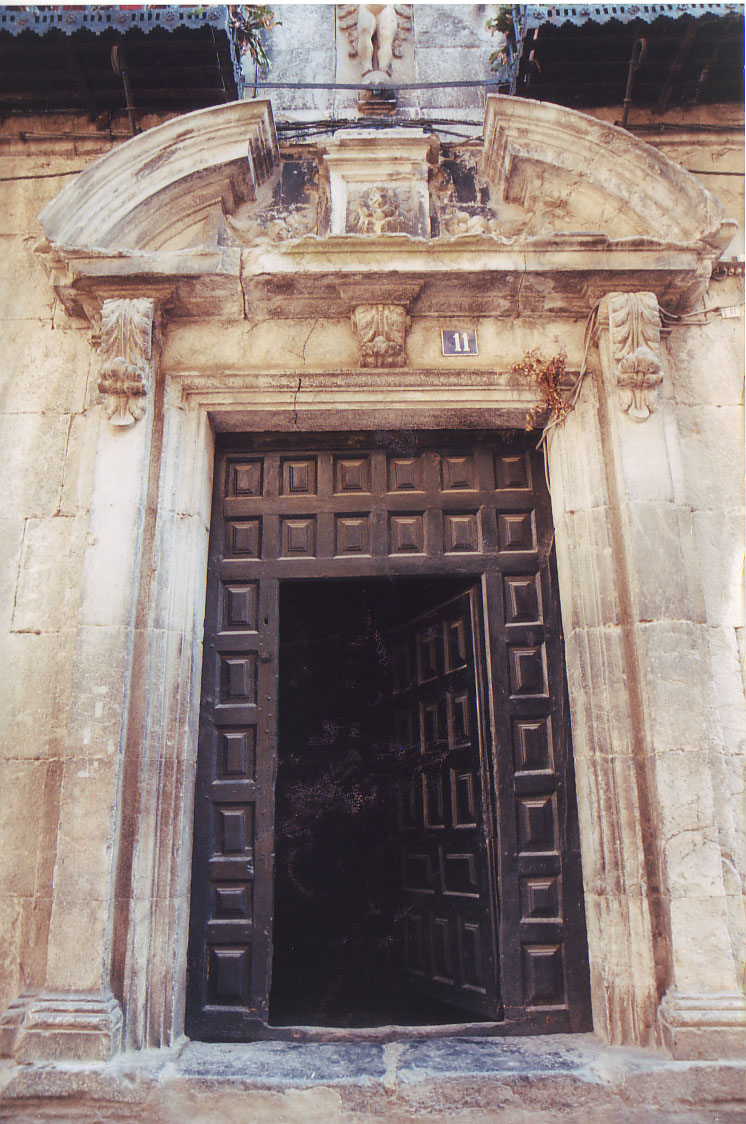 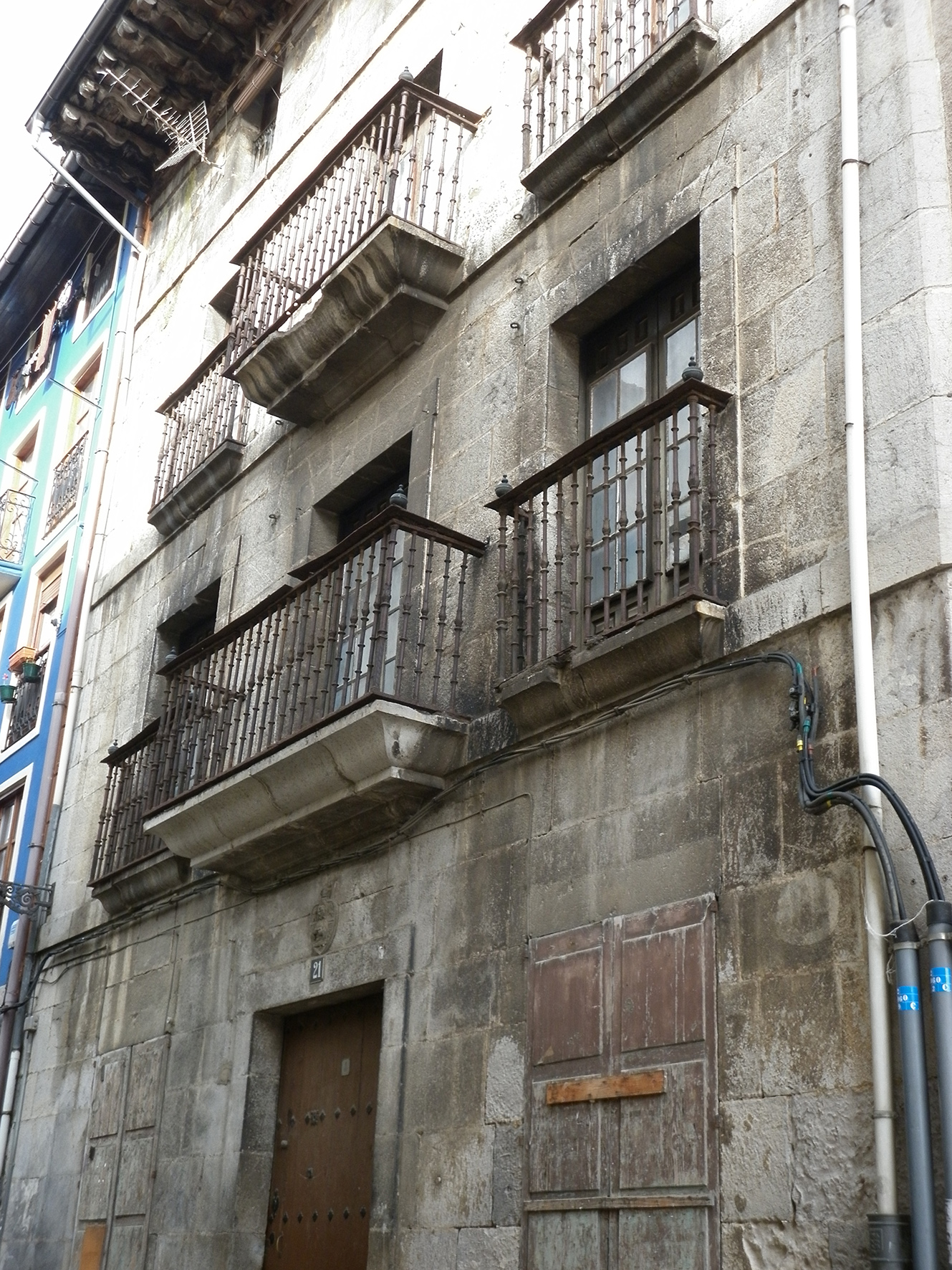 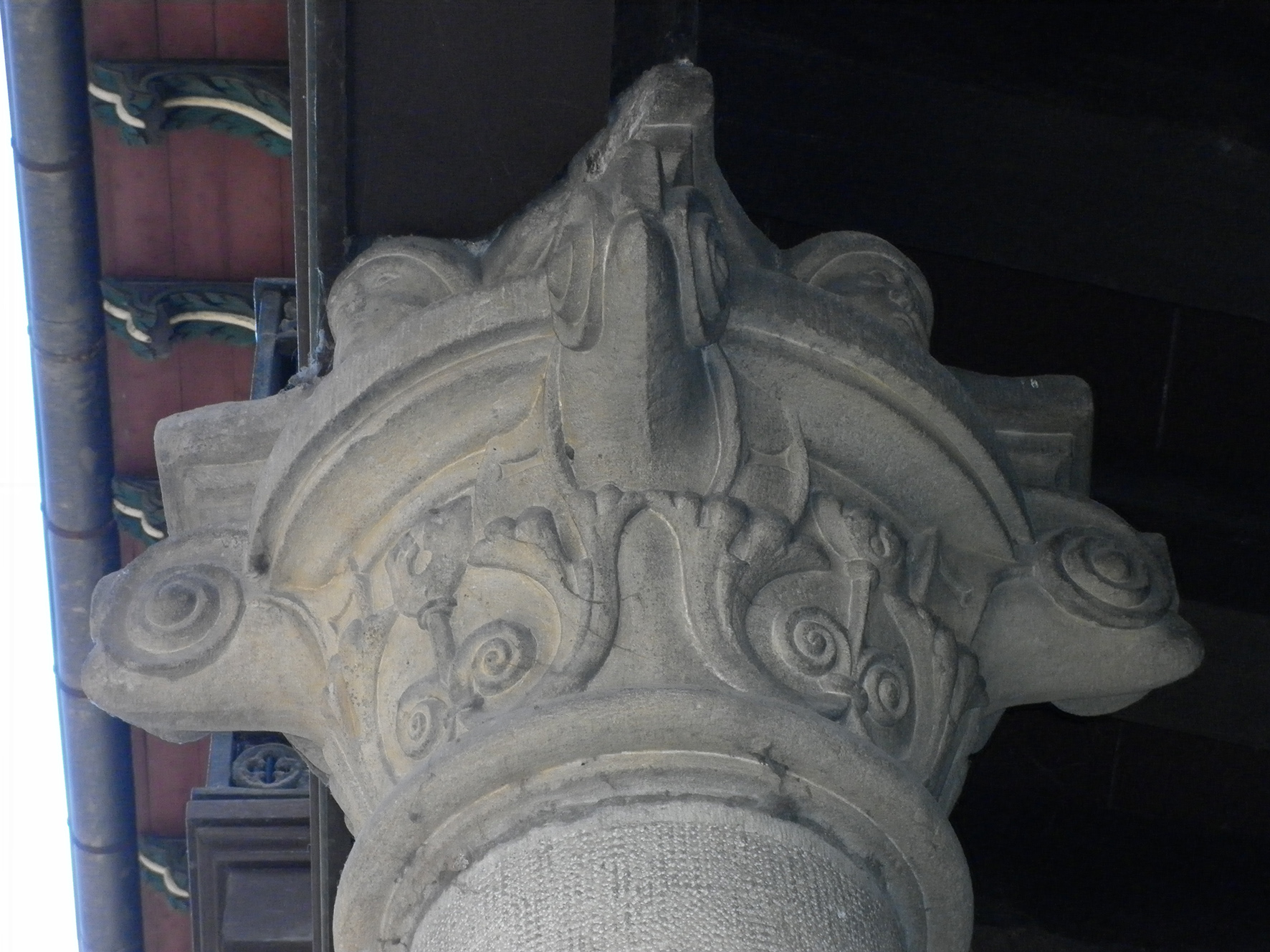 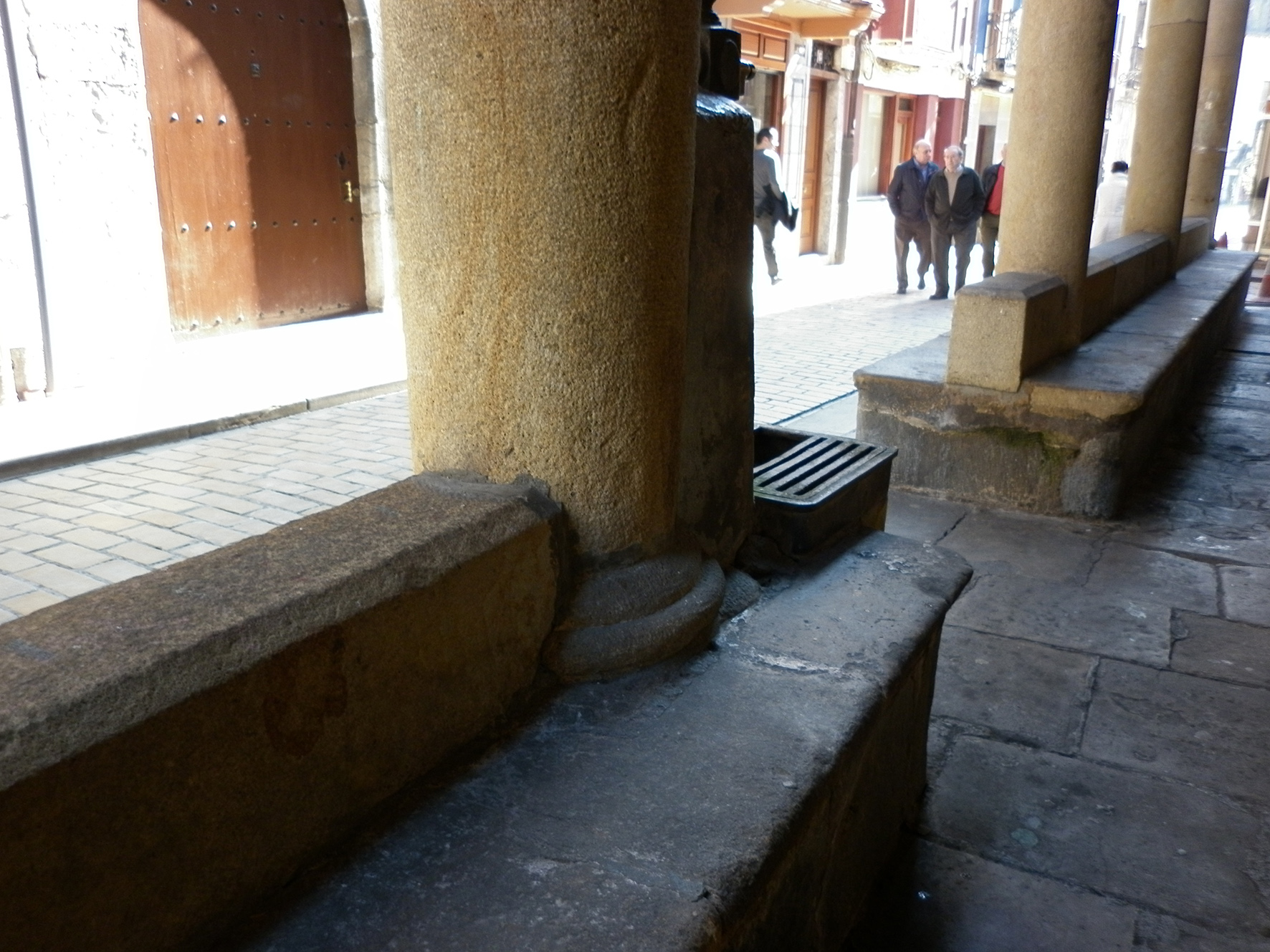 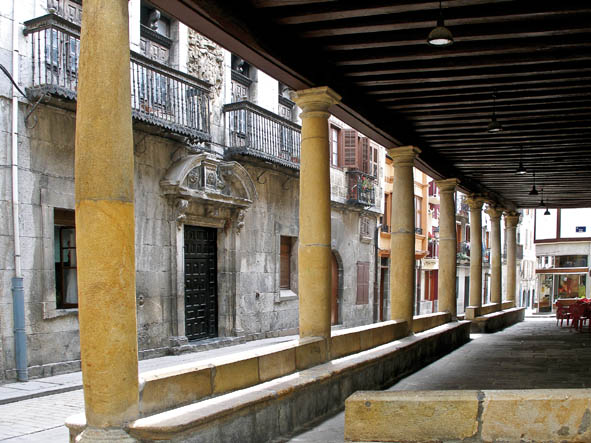 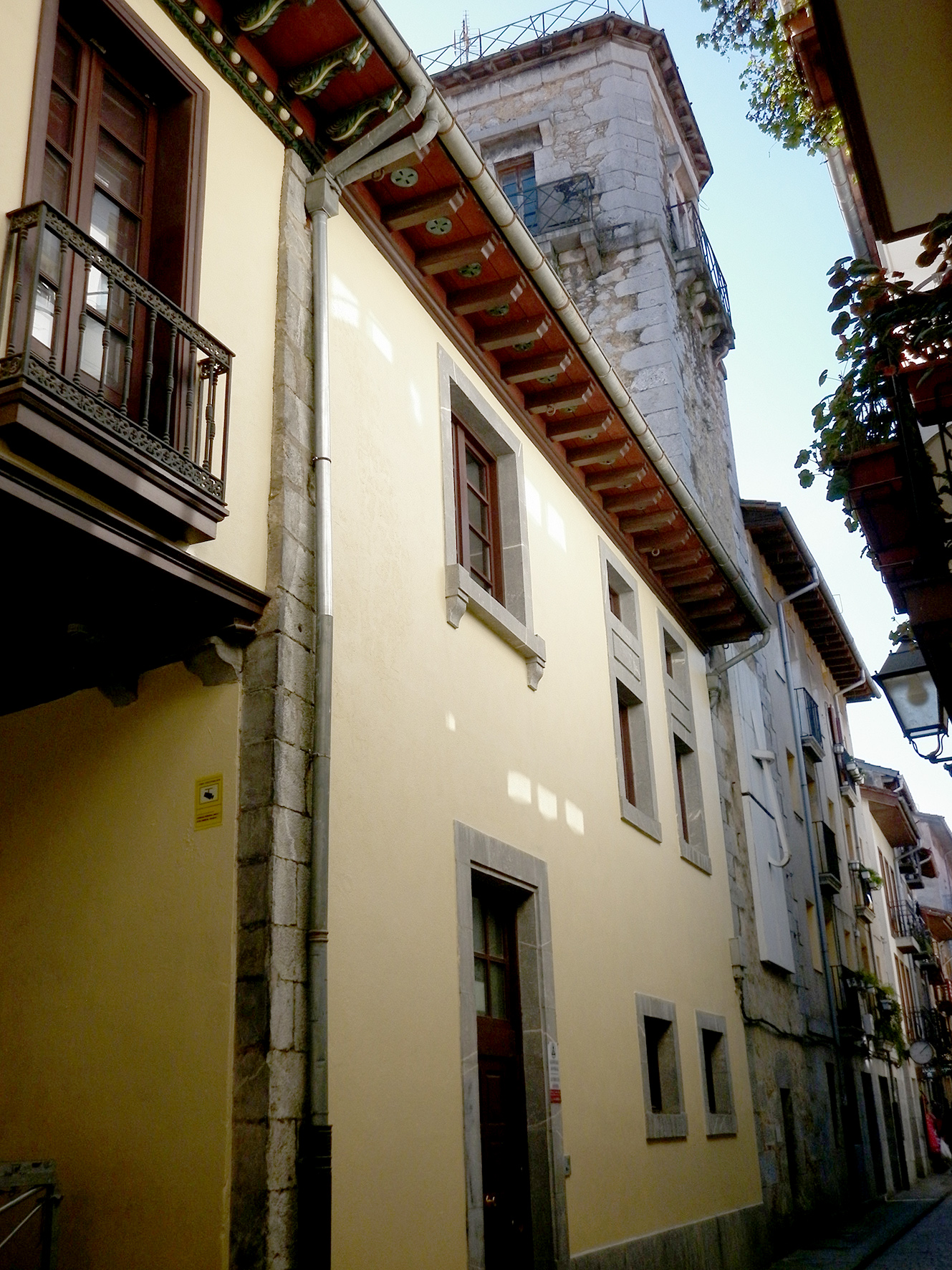 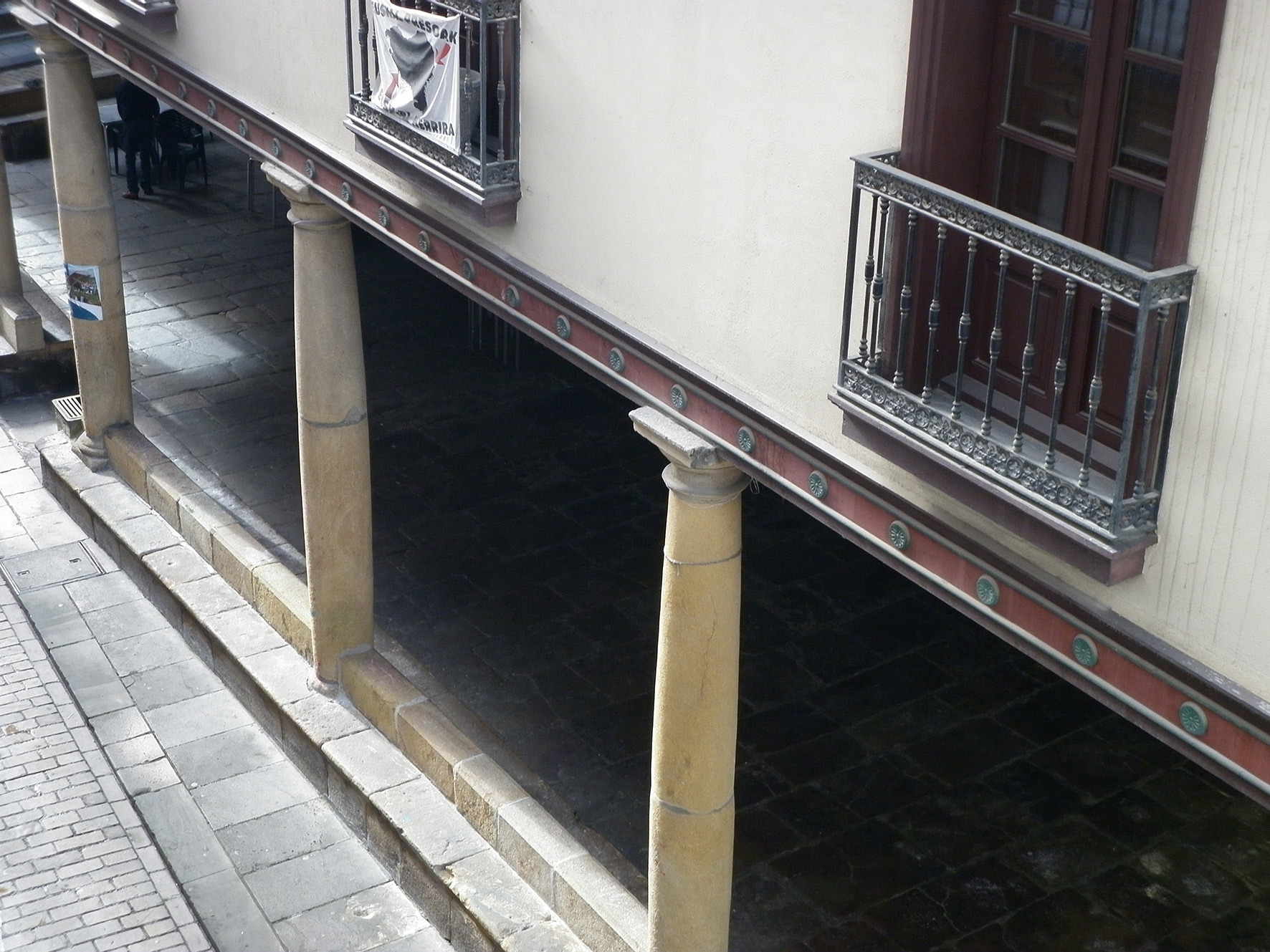 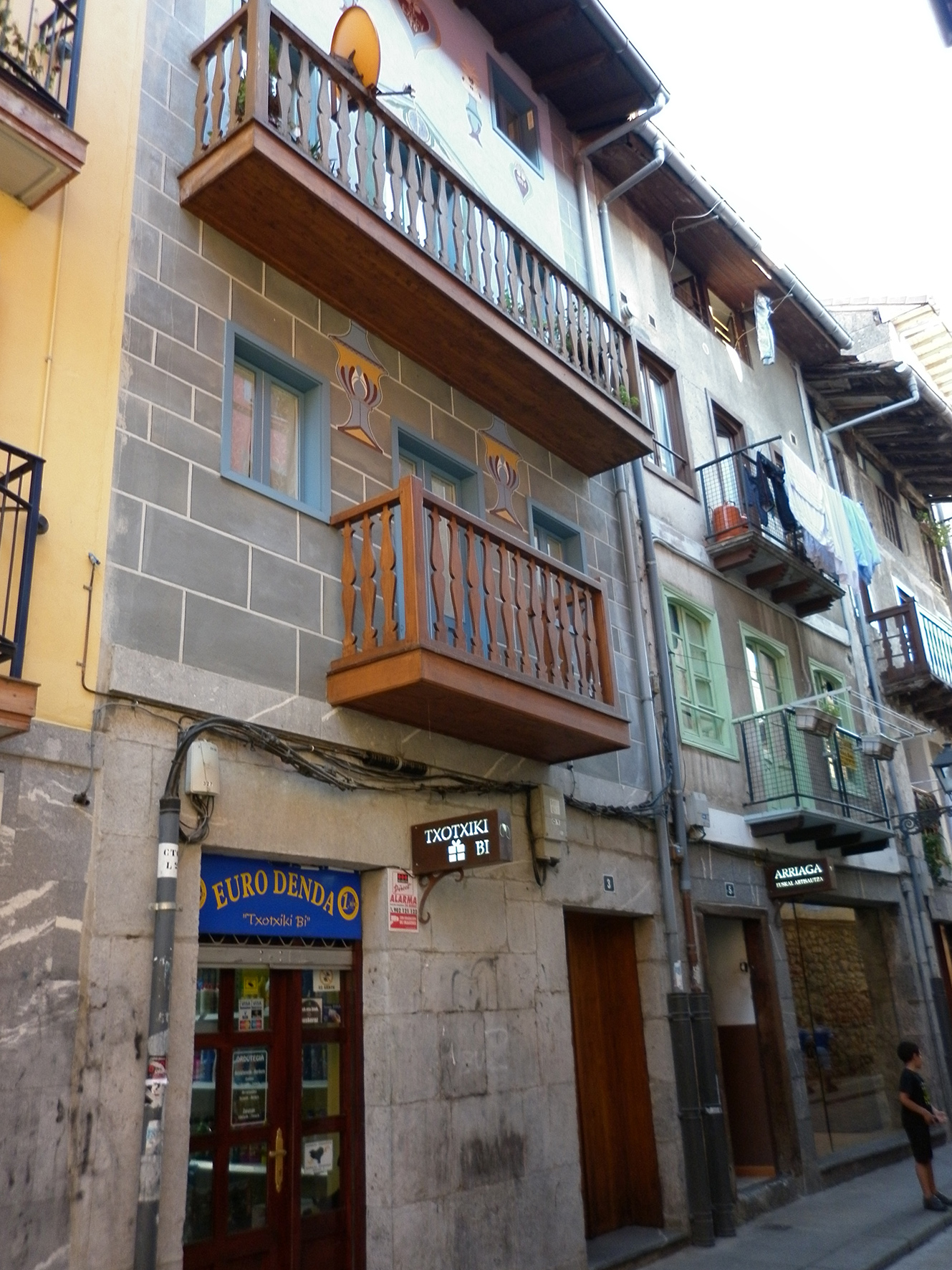 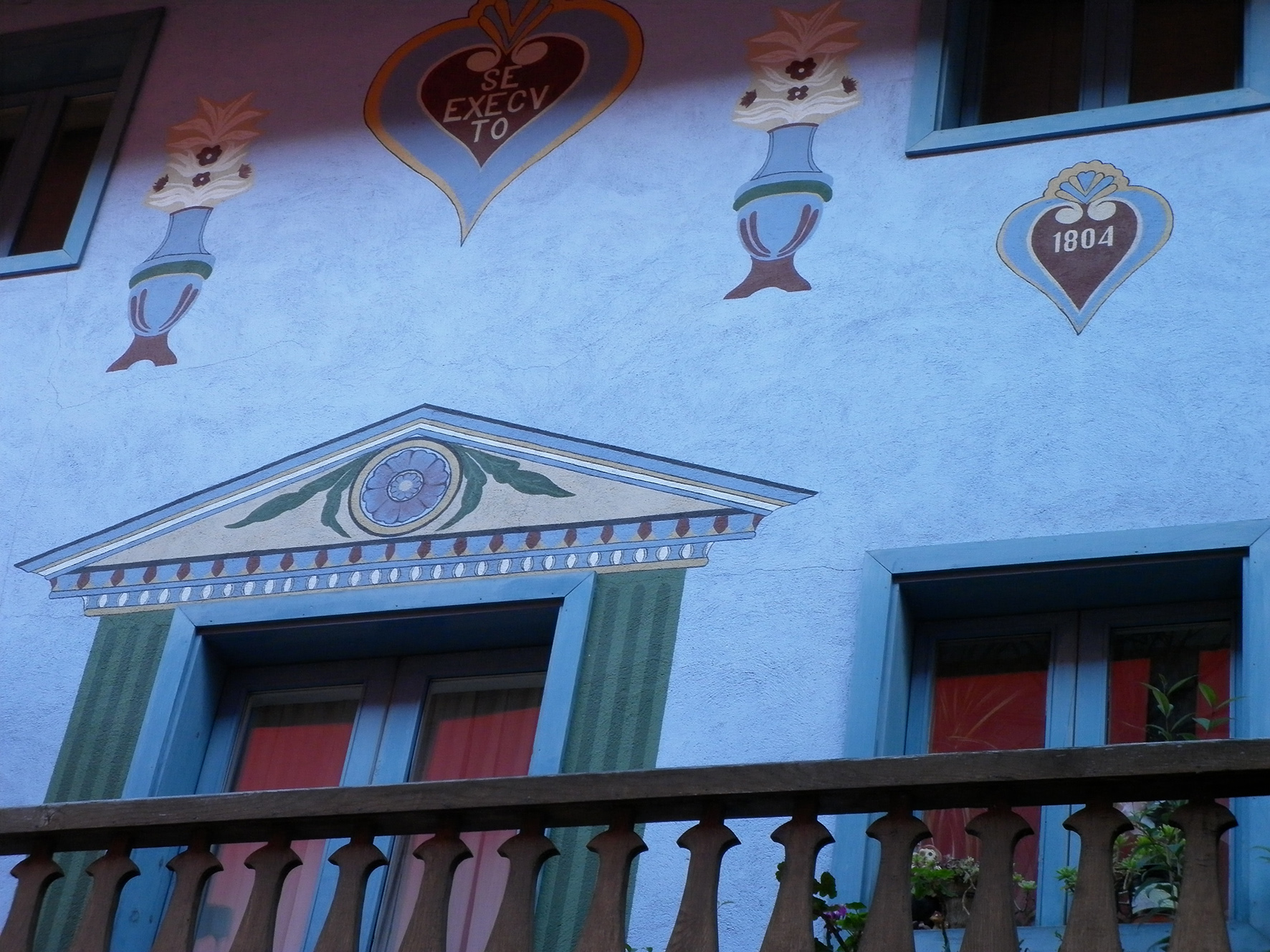 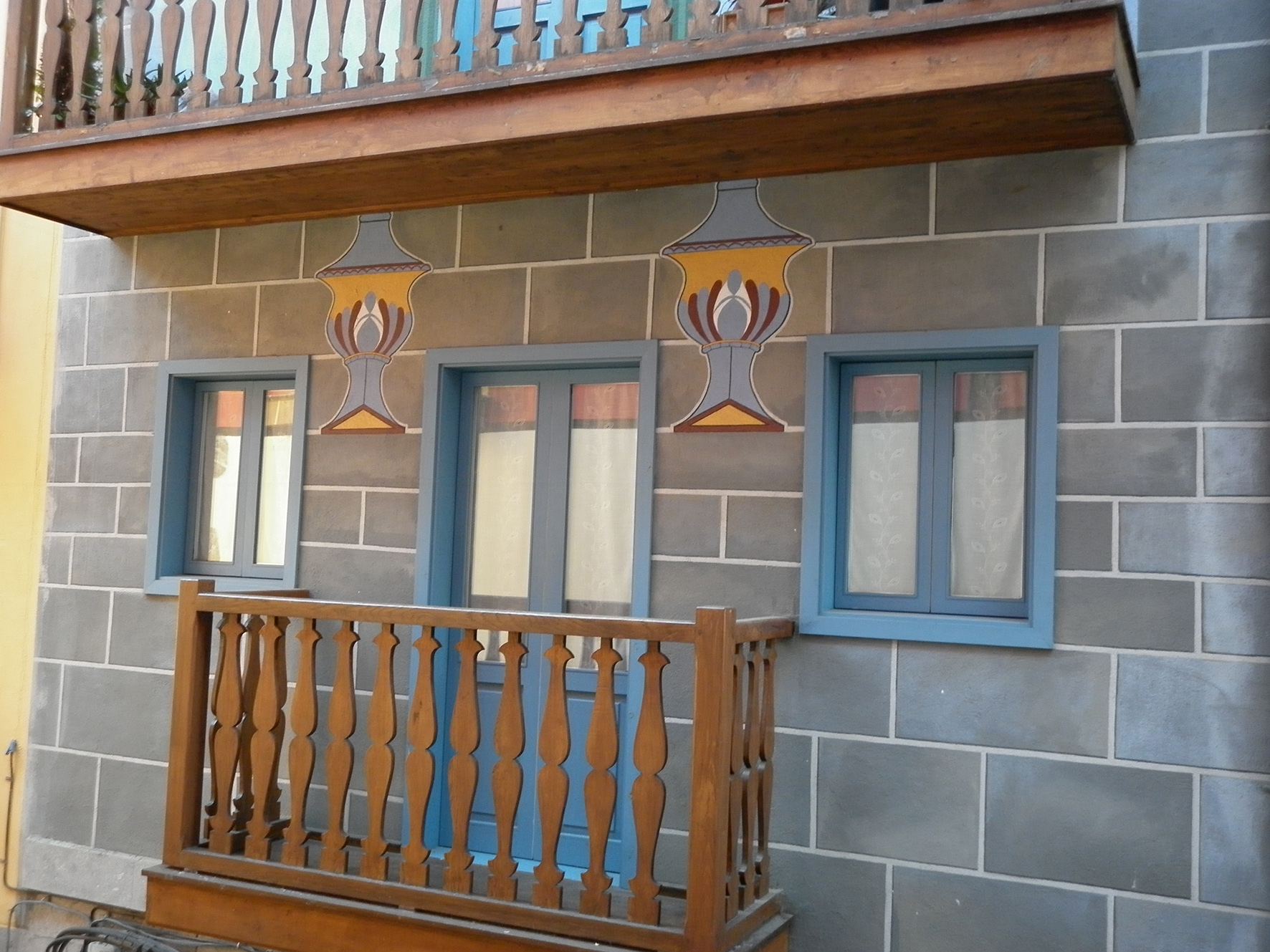 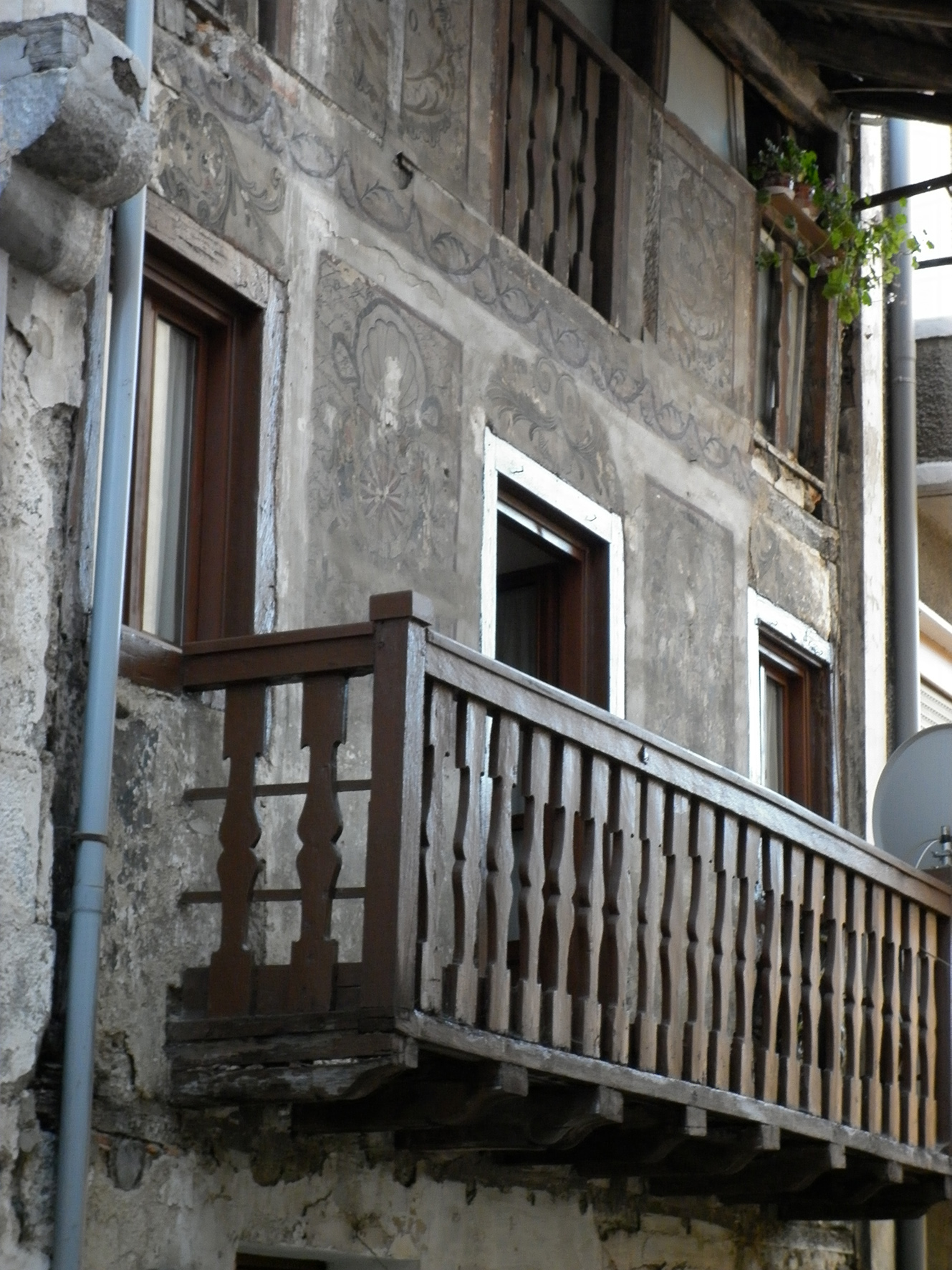 Continue visit: Following monuments
QR-6
Guenkalea
In the 1630 population census of Markina, this late medieval tower transformed into a palace belongs to Doña María de Ugarte. Thanks to Andrés de Ansotegui, his successor, the tower went through repairs since he made it a residential building. It is the example of a tower built within the walls so that its inhabitants could have closer the municipal power. The main facade, in limestone ashlar masonry, consists of three floors and an attic. The two arches on the ground floor, the twin pointed windows of the first floor, the large continuous balcony of the second floor and the row of small beams stand out. On the ground floor there are iron rings that were used to tie the horses. On the contrary, the facade that faces Abesua Street shows a more military aspect.
In Guenkalea Street – formerly Somera street- stands the Ansotegi or Munibetxea palace. A tower transformed into a palace of which only the facade that faces Guenkalea remains and in which there are two pointed accesses on the ground floor and four pairs of twin pointed windows in the first floor. The missing building was painted in its upper part with geometric features similar to those that we can see in the upper part of house nº. 17 in Zeharkalea. Today it is a residential building that can be accessed from Calle Abesua nº 8.
Continue reading
QR-7
IRURETA GATE
Next to the old southern portal of the wall (called the Irureta portal) is the Arkupe house. It is a neoclassical building from 1854 with an arcaded facade facing the meadow, demonstrating its appreciation for the immemorial recreation place of the town.
An old oak grove, an important element in the urban layout of Markina, a meeting place and a place for taking strolls.
Baroque construction of the seventeenth century (1610). On its facade is the same shield that the tower of the same name, located in Urberuaga next to the BI-633 road, has. The oval shield contains a cross with fleur-de-lys outlines, a ribbon with dragon mouths, a tree with a passing animal and the inscription of the Ubilla motto: Paz más vale (Peace is better).
The community that existed without cloister since 1547 in the convent of San Agustín, on the opposite side of Santa María de Xemein, moved in 1653 to the current convent in the suburb of Abesua. The church dates from the 18th century (1793). Its limestone facade is in general simple, although the baroque manifestations are accentuated in the access. Above it is an empty sandstone cartouche, perhaps prepared to house the shield of the Order. It is finished off with a two-section belfry surmounted by a cross. The interior is shaped like a Latin cross and has the images of the Virgen de la Merced, san Pedro Nolasco, Nuestra Señora of Socorro, san Ramón Nonato and san Blas. On the baroque convent, the three brick floors were built in the 20th century by the Alava architect José Luis López de Uralde. Above the access, within a split pediment, the shield of the Order of Mercy is displayed: two children figures hold a crown and under it, the arms of Mercy, a cross and the four beams of the House of Aragon. Likewise, the facade shows another shield of the Order, although it´s a more modern work.
In 1917, the Colegio of the Merced began its journey launched by the Mercy nuns. They started with a small group of students with a clear objective: for women to have a place to train and expand their opportunities. In 1945, the Mercy nuns and the Berriz Congregation joined forces to set up the congregation that continues today: MMB or Missionary Nuns of Berriz. In 1961, expansion plans were carried out in the main building to start up the boarding school and expand the educational offer: it began to give Agricultural and Administrative high school. At that time, the school was renamed Colegio de la Vera-Cruz. In the period of democracy, when the possibility of teaching classes in Basque opened up, the School’s commitment to Basque culture was expanded. In 1985, the Colegio de la Vera-Cruz and the Ikastola Zerutxu were integrated and it took the name of Berakruz ikastola as we know it today.
Continue reading
QR-8
FRONTON
Sports facility known worldwide as University of Pelota because it is a learning center for the great figures of Jai Alai. The first fronton built dates from the 18th century, although previously and taking advantage of a piece of wall, it was played in the fronton known as El Siete.
Continue reading